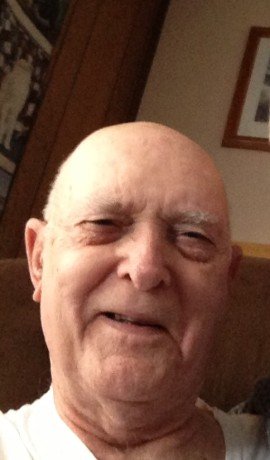 Lawrence Keith Stieringer, 83, of Chaplin Road, Morgantown went home to be with Jesus on Monday, May 11, 2015 very peacefully at home surrounded by his family. Lawrence was born on January 23, 1932 at Salt Lick, Preston County, son of the late Jesse Daniel and Anna Taylor Stieringer. Lawrence bravely served his country in the West Virginia Air National Guard Company A Heavy Tank Batallion from February 14, 1949 to August 31, 1950. Following this service he was an Airman Third Class in the United States Air Force 55th/72nd Air Police Squadron at Ramey Air Force Base in Puerto Rico. Lawrence was a carpenter, electrician, plumber, and master of all. He was self-employed for many years with the late Jim Adams starting the Harmony Grove Sub Division. He then moved on to Mon General Hospital as a master carpenter/painter; where he retired in 1994. Lawrence loved being outdoors watching birds and sitting in his rocking chair. Until his health would not allow, he enjoyed hunting, fishing, and gardening. He enjoyed reunions with his Air Force brothers and many trips to Canada with his fishing buddies. He was a board member for many years with the Laurel Point Methodist Church also being responsible for parsonage and church maintenance. Lawrence is survived by his wife of nearly 39 years, JoAnn Chambers Stieringer; one daughter Linda Stieringer Stimmell of Morgantown; step-daughters Karen Jenkins Bucklew and her husband Paul of Tunnelton and Linda Jenkins Chance and her husband Dave of Salt Lake City, Utah; grandchildren Robert Stimmell and his wife Nicole of Morgantown, Chasity Soccorsi-Al-Khalaf and her husband Adel from Doha, Qatar, Todd Kisner, Jonathan and Steven Anderson, all of Morgantown, and Nelson Bucklew of Tunnelton; great-grandchildren Alexis and Aiden Stimmell of Morgantown, Aziz, Sheikha, and Abdulla Al-Khalaf of Doha, Qatar; one brother Carroll Stieringer and his wife Carolyn of Morgantown; his faithful friends and fishing buddies, Alan “Hood” Hood and Raymond Hawkins; and several nieces and nephews. In addition to his parents, Lawrence was preceded in death by one sister Ruth Stieringer Logan and a brother, Calvin Stieringer in infancy; and life-long friends Roy “Doc” and Cora Lou Henry. In lieu of flowers, the family requests that contributions be made in Lawrence’s memory to Laurel Point United Methodist Church, in c/o Nancy Holbert, 36 Sugar Lane Terrace Morgantown, WV 26501. Friends may gather at McCulla Funeral Home on Friday, May 15th from 3-9 pm and on Saturday from 9:30 until the 10:30 am funeral service with Pastor Tammy Phillips officiating. Burial will follow at Beverly Hills Cemetery with full military honors conferred by Westover VFW #9916 and the Air Force Military Honors. Online condolences may be extended to the family at www.mcculla.com
To send flowers to the family or plant a tree in memory of Lawrence Stieringer, please visit Tribute Store
Services for Lawrence Stieringer
There are no events scheduled. You can still show your support by sending flowers directly to the family, or planting a memorial tree in memory of Lawrence Stieringer.
Visit the Tribute Store
Print
Share A Memory
Send Flowers