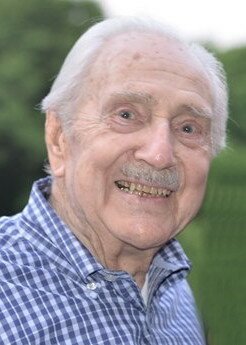 Please share a memory of Carl to include in a keepsake book for family and friends.
View Tribute Book
Obituary for Carl D. York May 30, 1926 – September 25, 2021 Birthplace: Marion, Indiana Death: Morgantown, West Virginia After 95 years on this earth Carl went home to be with the Lord on September 25th. Carl was born in Marion, Indiana on May 30, 1926, to parents Charles D. and Gertrude H. York. He had one brother Charles D. Carl was a 1944 graduate of Marion (Ind) H.S. where he was captain of the Band and the track team along with being a member of National Honor Society and president of the Business Club. Shortly after graduation, he enlisted in the U.S. Army and was assigned to the 16th Armored Division attached to General George Patton’s 3rd Army for combat duty in the European Theatre, March 1945. Shortly after WWII ended in Europe, he was assigned to the 1st Infantry Division in Germany for occupation duties and completed his military service honorably discharged in August of 1946 as a T/4 Sergeant. Carl enrolled at Indiana University where he was a member of Acacia fraternity and graduated with a business/banking degree in 1951, following in the footsteps of his father and brother with a banking/finance career. During his career, he obtained a master’s degree at Marquette University and became a licensed Indiana High School Wrestling official for many years along with serving as an officer of several service and charitable organizations including the Lions and the National Savings and Loan League. In the 1970’s he became a licensed Real Estate Broker and followed that with completing the requirements to become a licensed Real Estate Appraiser. Carl was an avid body builder and weight lifter winning many prestigious awards including the 1948 - 50 Indiana state championship in deadlifting. He remained a loyal gym attendee for the largest part of his long life. His philosophy was physical fitness kept you healthy and his extraordinary longevity was a testament to that. His work also fulfilled him immensely and thru that he accumulated many prestigious career awards throughout his lifetime. Some of which were the West Virginia 35th Star of Statehood award presented by Senator Joe Manchin, the Kentucky Colonel award and many home builders assoc. awards. Some of these were his 2018 Distinguished Service Award of Uncommon Dedication and outstanding service to N. Central WV. Home builders. He served many years on the Mon General Hospital finance committee helping to better the healthcare organizations in his community. He loved to help others in business, socially and most importantly his family but also loved to discuss wide ranges of subjects with passion on several. He met Linda, his wife of 44 years during his banking career in Indiana and they moved to Morgantown in 1982 to lead the mortgage loan department at what was then First Federal Savings & Loan, now United Bank. Carl and Linda immediately fell in love with West Virginia and after his retirement from the Savings and Loan industry, he went to work with Linda to appraise real estate for the Puccio and York appraisal firm until his death. Retirement never agreed with him, he loved his work and the interactions that he was able to form by doing it. He loved conversing with people on a wide variety of subjects, mostly as a way to meet of their pets. He loved his role as a husband, father and grandfather and took joy in being there for his family and friends whenever they needed him. He was proud of his career allowing him to help thousands of families obtain and improve their homes by obtaining a mortgage loan. He loved his King Charles doggie & barn queen; Emmy, birds, wildlife and the “Mountaineers!” He was a member of Kingdom a Community Church in Morgantown WV. He is survived by his wife, Linda, Morgantown, and eight children: sons, Carl D. (Marcia)-Indiana, Erick (Rhonda) - North Carolina, Todd- Morgantown, and daughters, Michelle (Yukio)- Indiana, Cindy - New York, Jennifer (Tony)- Indiana, Ronda - Florida, and Taya - St Marten. Ayako (Ken)- Japan are bonus children originally added to our family after her introduction as a post graduate student at WVU. There are also 20 grandchildren and 8 great grandchildren. In lieu of flowers, please make a memorial to a charity of your choice, please consider a pet rescue. McCulla Funeral Home has provided cremation service. A memorial service will be held at Kingdom: A Community Church, 540 Fairmont Road, Westover on Saturday, November 13, 2021 at 11 am with Rev. Kevin Cain officiating. Online condolences may be extended to the family at www.mcculla.com
Print
Saturday
13
November