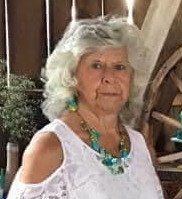 Patty Jo Gribble Burris, 78, departed this life on March 4, 2021 at her home. Patty was born on September 3, 1942; a daughter of the late George Gribble Senior and Mildred Lucille Doman Gribble, who are both deceased. Patty is survived by her husband of 59 years, George Hatfield Burris; who she married on May 20, 1961; son: Ronald Keith Burris of Morgantown; daughter: Tamyra Jo Sollon (John) of Morgantown; four grandchildren: Tyler Warren Fairbanks (Samantha), Megan Jo Main (Joel), Madison Paige Sollon, and Garrett Sollon; two great-grandchildren: Emmie Jo Main and Dean Main; two sisters: Betty June Baker (Vernon) of Mt. Morris, PA and Rosemary Goff (Max) of Lenox, WV; three brothers: George Kenneth Gribble, Jr. (Shirley), Robert Daniel Gribble (Becky), and Billy Ray Gribble; one brother-in-law, Delbert Shaffer; and many nieces, nephews, and friends. In addition to her parents, Patty was preceded in death by her sister: Bonnie Jean Shaffer. Patty loved her husband, children, grandchildren, great grandchildren, sisters and brothers with all of her heart and did anything she could to make them happy. She also taught them about our Lord and Savior Jesus Christ. She was a member of the Mt. Morris Gospel Tabernacle. The family wishes to extend a special thank you to Amedisys Hospice for all of the care and support given to Patty and her family during her illness; especially her nurses: Lori, Aminda, and Sarah. McCulla Funeral Home arranged for private services which were held for her family. Following the service, burial took place at Cedar Grove Cemetery. Online condolences may be extended to the family at www.mcculla.com
Services for Patty Burris
There are no events scheduled. You can still show your support by sending flowers directly to the family, or planting a memorial tree in memory of Patty Burris.
Visit the Tribute Store
Print
Share A Memory
Send Flowers