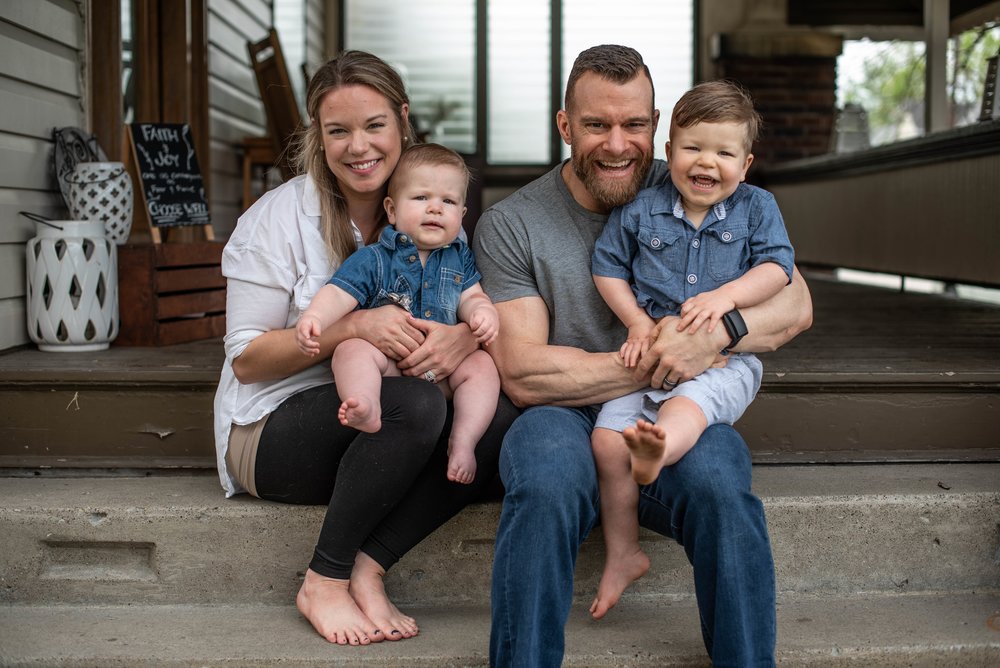 On Saturday, January 23rd, 2021, Jeffery Michael Giosi was victoriously received into the mighty arms of his Everlasting Father. Jeff cherished life and pursued it to the full. He loved his wife of five years, Sarah Rebekah Rowan Giosi, and their two boys Arlen Fahy (3) and Mackie Wade (1), with his whole heart, and claimed them as his greatest blessing, joy, and legacy. Driven by the pursuit of deep connections, ultimate truth, and authentic relationships, Jeff is revered by all who knew him as a man of God, a faithful husband, devoted father, friend, hero, mentor, and brother. Jeff entered the world on April 12th, 1980, in Port Jefferson, Long Island, New York. In his short but full 40 years, he called several states home, but was a Mountaineer through and through. Jeff attended West Virginia University earning a B.S. in Physical Education/ Teacher Education and an M.S. in Strength and Conditioning. He was an integral part of the WVU athletic department as a strength and conditioning coach from 2002 to 2008. For a short time, Jeff followed the call to North Carolina where he proudly served as a firefighter for the Greenville Fire-Rescue Department and a Fire Academy educator. After North Carolina, Jeff went to Michigan to work with his mentor, world-renowned strength coach, Mike Barwis. Jeff trained all levels of athletes--from amateur and college to Olympic and professional--but before long, those country roads led Jeff back home to West Virginia, where he belonged. In 2014, Jeff became the proud owner of Crossfit Morgantown and adopted the slogan, “Friendship, Love, and Loyalty.” He devoted himself to this community, coaching each member, not only in wellness, but in life. He encouraged everyone he met to believe they could become the best version of themselves--the person he believed them to be. Jeff would often say, “My goal when I wake up is to encourage and inspire everyone I come in contact with.” Jeff believed that what we do, say, and think in any instant is the essence of life-- “Because we aren't guaranteed anything else.” Jeff embraced the ideal memento mori, which means “Remember Your Death,” and he urged others to, “Love like you are going to die tomorrow; dream like you are going to live forever.” Jeff loved fully, and his relationship with Christ empowered him to be unabashedly authentic and to love recklessly. He trusted that God’s plan is sovereign and that He shapes us in every circumstance, good or bad. Without a doubt, Jeff wanted everyone he met to seize God’s trajectory for their own life, and to be a beacon of all that is good in the world. Jeff is survived by parents Doreen and Dennis Keene, Frank Giosi, and Cindy and Arlen Rowan; siblings Kris Giosi, Anthony and Jessica Rowan, and Shon and Michelle Rowan; nieces and nephews Christian, Foster, Chandler, Bailey, Lizzie, Nicky, and Freedom. Also surviving is the brotherhood and sisterhood of friends who are blessed to have run alongside Jeff in his race. On January 30th, 2021, his loved ones gathered around their forgiven warrior in a private ceremony at McCulla Funeral Home in Westover, WV. Knowing how widely Jeff was loved, the Morgantown community and all who were impacted by him are invited to a memorial event in his honor, set to take place on April 10th in Morgantown, West Virginia. Details to come.
To send flowers to the family or plant a tree in memory of Jeff Giosi, please visit Tribute Store
Services for Jeff Giosi
There are no events scheduled. You can still show your support by sending flowers directly to the family, or planting a memorial tree in memory of Jeff Giosi.
Visit the Tribute Store
Print
Share A Memory
Send Flowers