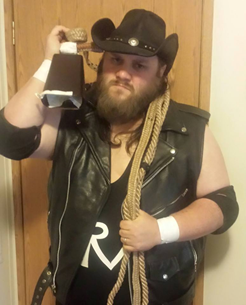 Terry “Ricky Villain” Bell, 31, of Maidsville, passed away unexpectedly at Ruby Memorial Hospital on July 10, 2017. He was born in Morgantown on November 27, 1985 to Gary Dean Bell and Rose Marie (Shumate) Bell of Westover.

Terry was a professional wrestler by the name of Ricky Villain. He began training at the age of 15 and wrestled for numerous companies all over the east coast.  He was also a professional actor.  Terry enjoyed listening to heavy metal music (especially Iron Maiden) as well as spending time with his daughter. He was a lifelong New York Mets fan and member of the 7 Line Army. He collected movies and enjoyed playing video games in his spare time. It was rare to see him without a smile on his face, or to hear a story told in such a way that only he could tell it.

In addition to his mother, he is survived by his wife, Kara Lynn (Frey) Bell; daughter Lizzy Blaze Bell, brother Paul Gunter and his wife Laura; a niece Lauryn Gunter; and nephew Brandon Gunter. He is also survived by his English bulldog Harvey Orion Desert Flame Bell.  He is survived by uncles, aunts, cousins and by numerous brothers and sisters in professional wrestling.

Terry was preceded in death by his English bulldog and best friend Angus.

McCulla Funeral Home has provided cremation services and a party will be held in memory of Ricky Villain on Saturday, July 29th at Kegler’s Sports Bar K2 Room from 3-6 pm.  In lieu of flowers, please send all donations to McCulla Funeral Home. Online condolences may be extended to the family at www.mcculla.com