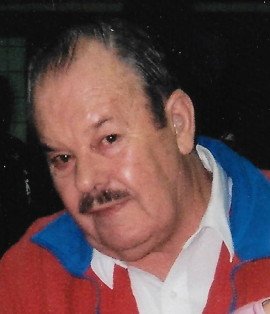 Please share a memory of John to include in a keepsake book for family and friends.
View Tribute Book
John Robert Goodwin, 80, of Rolling Meadows in Waynesburg, PA, formerly of Morgantown, passed away at Washington Health Systems-Greene Hospital on December 11, 2015. John was born in Morgantown on August 24, 1935 to the late Harry & Anna Meshok Goodwin. John was a mechanic for Galis Electric and serviced in the United States Army. He was also an avid NASCAR fan, enjoyed watching Mountaineer basketball, and was a member of the American Legion Post #200. John is survived by his daughter, Staci Snyder and her husband Rick of Parkersburg; his son Scott Goodwin; sisters Peggy Goodwin of Pursglove, Lulu M. Kincaid and her husband Homer of Cheat Lake, Gloria Wassick of Morgantown, and Frances Bierer and her husband Mike of Morgantown; brothers Joe Goodwin and Kenneth Goodwin, both of Morgantown; and grandchildren Chloe and Cheyenne. In addition to his parents, John was preceded in death by his sister Patricia Goodwin, and brothers Lee Goodwin and Richard Goodwin; and a brother-in-law Steve Wassick. Friends are invited to gather at McCulla Funeral Home on Sunday, December 13th, 2015 from 2-3:30 pm and on Monday, December 14th from 10 until the 11 am funeral service with Pastor Dan Meadows officiating. Burial will follow at Lawnwood Cemetery with military honors conferred by Westover VFW Post#9916 and WVANG Military Honors, Camp Dawson. Online condolences may be extended to the family at www.mcculla.com.
Services for John Goodwin
There are no events scheduled. You can still show your support by sending flowers directly to the family, or planting a memorial tree in memory of John Goodwin.
Visit the Tribute Store
Print
Online Memory & Photo Sharing Event
Online Event
About this Event