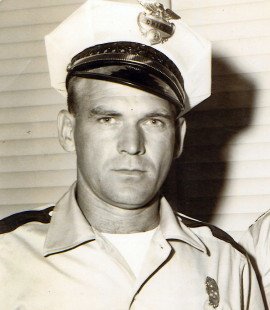 Please share a memory of Audrey to include in a keepsake book for family and friends.
View Tribute Book
Audrey E. “Junior” Golden, Jr., 85, of Granville passed away at his home on May 2, 2015 with his loving wife by his side. Junior was born in Akron, OH on July 19, 1929 to the late Audrey F. Golden and Lorraine Grose Golden. Junior retired from West Virginia University and had served as Granville Chief of Police, Granville Fire Dept. Chief, and Monongalia Deputy Sheriff. He was a gunsmith most of his life and had many hobbies. He enjoyed going to shooting matches and when he was younger he had won trophies for marksman and sharpshooter. He loved all animals and would spend each day feeding wild animals. Junior is survived by his loving wife of 66 years, Bonnie (Wolfe) Golden; daughters Brenda Rossi and her husband Ron and D’Ann Kaib and her husband Bob; and daughter-in-law JoAnna Golden; grandchildren Teresa Shioda and her husband Shohei, Arnold Brock, Ron Rossi and his wife Stephanie, Tina Meredith and her husband James, and Sean Brock and his wife Stacey; great-grandchildren Joshua and Adam Shioda, Sienna and David Brock, Hannah, Lauren, Hollyn, and Andrew Rossi. Also surviving include; brothers and sisters, Fred Golden, Elinor Catalogna and her husband Louis, Mary Lewis, and Daniel Golden and his wife Patty; sisters-in-law, Alice Mayles and Janet Chermer; and his brother-in-law, Terry Wolfe . In addition to his parents, Junior was preceded in death by his beloved son, Gary Golden; and brothers, William and David Golden. His family wishes to offer heartfelt thanks to Kenneth Zeigler and Dick Basferd for their help and support throughout the years and during his illness and many thanks to family and friends. Friends are invited to gather at McCulla Funeral Home, on Tuesday, May 5th from 2-4 & 6-8 pm. A funeral service will be held at McCulla Funeral Home on Wednesday, May 6th at McCulla Funeral Home at 11 am with Pastor Jim Weber officiating. Burial will follow at East Oak Grove Cemetery. Online condolences may be extended to the family at www.mcculla.com.
Services for Audrey Golden
There are no events scheduled. You can still show your support by sending flowers directly to the family, or planting a memorial tree in memory of Audrey Golden.
Visit the Tribute Store
Print
Online Memory & Photo Sharing Event
Online Event
About this Event