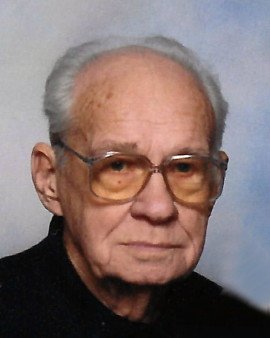 Please share a memory of Edward to include in a keepsake book for family and friends.
View Tribute Book
Edward Lawrence Maurin, age 94, of Westover, passed away Wednesday, January 6, 2016 at Mon General Hospital. Edward was born in Brooklyn, NY on January 2, 1922, a son of the late John and Antonia Jeschelnik Maurin. Edward proudly served his country in the U.S. Army and was a lifetime member of the Westover VFW Post 9916. Edward also worked for the WV Department of Highways as a material testing technician for many years. Edward is survived by his daughter, Barbara Ryan and husband Barry of Morgantown; son, James Maurin and wife Michelle of Morgantown; grandchildren, Shawn Ryan and wife Beth, Kelly Giles and husband Chris, and Cody Maurin; great grandchildren, Allison and Zachary Ryan; and sister, Marie Comley. In addition to his parents, Edward was preceded in death by his wife, Ethel Jones Maurin, who passed away September 29, 2015; and sister, Madaline Cross. Friends may call at the McCulla Funeral Home, 770 Fairmont Road, Morgantown from 3-5 & 7-9 pm Sunday and on Monday from 10:00 am until the 11:00 am funeral service with Dr. David Spence officiating. Burial will follow at Beverly Hills Cemetery with graveside military honors conferred by the Westover VFW Post # 9916 and the WVANG, Camp Dawson. The family requests that donations be made in Edward’s memory to the Wounded Warriors Project P.O. Box 758517 Topeka, Kansas 66675. Online condolences may be sent to the family at www.McCulla.com.
Services for Edward Maurin
There are no events scheduled. You can still show your support by sending flowers directly to the family, or planting a memorial tree in memory of Edward Maurin.
Visit the Tribute Store
Print
Online Memory & Photo Sharing Event
Online Event
About this Event