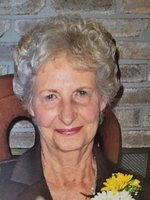 On Saturday morning, April 3, 2021 Carleen (Eavenson) Click, age 96, of Morgantown, West Virginia, departed from this life to be joined with our Holy Father in eternal peace. Born on March 30, 1925, she was the daughter of John and Lida Weiland of Morgantown. She was preceded in death by her parents, her late husband Charles William Eavenson, her sisters Martina Lawson and Mildred Hormell and her brothers Ronnie Weiland, Milton Weiland and Melvin Weiland. She leaves behind three children, six grandchildren and fourteen great grandchildren. She was the beloved mother of Nancy Lee Walters of Morgantown, West Virginia; John Steven Eavenson of Melbourne, Florida; and Charles William Eavenson of Harrisburg, Pennsylvania. She will be missed by her grandchildren Carla Rossi Thompson of Morgantown, West Virginia; David Rossi of West Palm Beach, Florida; Lisa Garoust of Melbourne, Florida; Erik Eavenson of Melbourne, Florida; Tyson Eavenson of St. Augustine, Florida; and Jessica Eisenhower of Harrisburg, Pennsylvania; her many great grandchildren, as well as her many nieces and nephews, whom she loved very much. Morgantown was home to Carleen during much of her life where she worked in the public school system, as well as several retail and manufacturing operations. During her later years, she worked as the office manager at Huntington High School in Huntington, West Virginia, until she retired and moved back to Morgantown. While in Morgantown, she was a member of the BOPARC Red Hot Momma’s, a chapter of the Red Hat Society, and she enjoyed having lunch on Wednesdays with her friends at the BOPARC Senior Center. She also liked to play bingo at the Westside Senior Center in Westover. Her final years were spent at Elmcroft at Maplewood Independent and Assisted Living facility in Bridgeport, West Virginia, and most recently at Sundale Nursing Home in Morgantown. Carleen will be missed by her entire family, but we are all comforted in knowing that she departed this life in peace and will now be united with all her loved ones in Heaven. Her family would like to thank the wonderful staff at Elmcroft at Maplewood Independent and Assisted Living Facility in Bridgeport, WV; Sundale Nursing home in Morgantown; and Morgantown Hospice for the excellent care they provided. McCulla Funeral Home was in charge of making arrangements. At Carleen’s request, there will be no public visitation or funeral services. Following a private family gathering, for immediate family only, she was laid to rest at Mt. Union Cemetery on Tuesday April 6, 2021. Condolences may be made at mcculla.com.