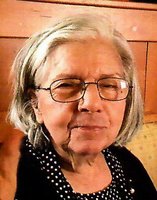 Patricia (Patsy) J. Gerard Favro, age 84 of Morgantown passed away peacefully on Friday, February 19, 2021 surrounded by her loving family. Patsy was born in Morgantown (Flaggy Meadow community) on November 6, 1936, the youngest of three children of the late Joseph and Virginia Fugera Gerard of River Road. Patsy graduated from Morgantown High School in 1954. She worked as a secretary for the late Eddie Barrett, WVU sports information director, from 1955-1960. She retired from the WVU Extension Service (Safety & Health) after 23 years. She was also the owner of Jackie’s Place in Sabraton, with her husband Jackie from 1987 until 2001 when he passed away and then she continued to operate the tavern until February 2007 when it was sold. Patsy is survived by her two sons, Jack Jr. and wife Margaret Gilbride Favro and Bradley and wife Kelly Raley Favro; two grandsons, Joshua Favro and wife Joyce Layman Favro and son Benji, and Kyle Favro; niece Sheila Anderson; sisters-in-law, Dorothy Musick Gerard and sons, Tony Gerard and wife Ann, and Victor Gerard; Roseann Michael, Joann Berrott; and nieces and nephews. In addition to her parents, Patsy was preceded in death by her husband, Jackie Favro; sister Dolores Anderson; brother Peter F. Gerard; and her faithful and devoted cat Buddy. Special thanks go out to her niece Sheila who cared for her until the end, along with friends Carol Atkins, Sherran Shaver and Yvonne Nieman. The family would also like to thank the staff of Amedisys Hospice, Mapleshire Nursing Home, WVU Hospital and family friend Dr. Fred Gabriele. At Patsy’s request, McCulla Funeral Home in Westover provided cremation services. There will be no viewing or funeral service. A celebration of Patsy’s life will be held at Kegler’s Clubhouse on Sunday February 28th from noon until 3 pm. Online condolences may be sent to the family at www.McCulla.com.