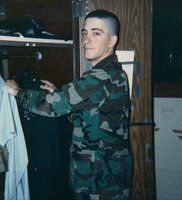 James (Andrew) Javosky of Morgantown, passed away Saturday, September 14, 2019. Andy was born on November 4, 1974, the son of the late Andrew (Buzz) Javosky and Beverly Jenkins.

Andy is survived by his two sons, Skye Javosky of Morgantown and Gunner Javosky of Core; one sister, Destiny Javosky of Waynesburg, PA; one brother, Charles (Chuck) Javosky of Bobtown, PA; aunts, uncles, cousins, and many friends; and one niece, Avlynn Baker.

Andy’s wishes were to be cremated. The family will have a memorial service at a later date.

“Fly high sweet angel. Walk all over beautiful heaven. Your work on earth is done.”