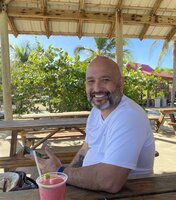 James “Jim” Allen Kerns, 50, of Apex, NC, formerly of Granville, passed away on December 20, 2022. Jim was born in the Philippines on October 20, 1972 to the late Gary Allen Kerns, Sr. and Cora P. Bone Kerns, who survives. Jim worked at HCL Tech in Cary, NC as a group manager. He was a member of the American Legion, served in the United States Marine Corps from 1991-1995, and enjoyed traveling and spending time with his family and friends. In addition to his mother, Jim is survived by his daughter: Shaelyn Greagrey Kerns of NC; son: Aiden James Kerns of NC; brothers: Gary Kerns, Jr., Noel Kerns, and Ronald Kerns sisters: Martha Kerns Cochran and Lisa Kerns Flanagan. Visitation will be held at McCulla Funeral Home on Monday, January 2, 2022 from 4-7 pm and again on Tuesday, January 3rd from 10 am until the 11 am funeral service with Pastor Evan Dlugos officiating. Following the service, Jim will be laid to rest at the West Virginia National Cemetery with full military honors. Online condolences may be extended to the family at www.mcculla.com.