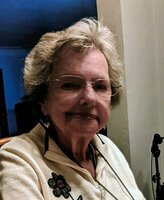 Betty Jean McConnaughey , 93 of Lambertville, Michigan, formally of Morgantown, passed away Thursday August 25, 2022. Betty was born in Madison, NJ on August 11 1929 to the Late George D and Elizabeth Gernert Moore During her time in Morgantown she was a member of the Suncrest United Methodist Church. Betty ran her own daycare, was involved with the Salvation Army, and the Humane Society. Betty is survived by her son Donald William Gilbert McConnaughey and his wife Kathy, of MI, daughter Kitte Louise Deakins of Grafton, Grandchildren Rhonda Pietrikowski Donald McConnaughey, Charles McConnaughey, Caleb Taylor and Richard Pagan. in addition to her parents, Betty is also preceded in death by her late husband Donald G McConnaughey, brothers George Moore and Gilbert Moore. In lieu of flowers, the family ask the donations be made to PAM Foundation which helps underinsured patients get the medication they need (P.O Box 30500 Bethesda, MD 20824.) Friends are invited to gather at McCulla Funeral Home on Wednesday August 31,2022 from 4-8PM and again on Thursday September 1, 2022 from 10am until the 11am funeral service with Pastor Junius Lewis officiating. Interment will follow at Beverly Hills Cemetery. Online condolences may be extended to the family at www.mcculla.com.